We are delighted to announce that we have extended our front-of-shirt sponsorship with Sheffield United for a second season.

Our brand and newly-designed logo will appear on the Club’s 2015/16 playing strip for competitive games as well as replica shirts, including the new-look 125 anniversary home strip.

Business owner Mark Holland said: “We have been delighted to partner with Sheffield United and we look forward to another season with the Blades.

“Both United’s loyal fan base of passionate supporters and the cup run which saw the Club progress to the semi-finals of the League Cup against Tottenham Hotspur have further helped grow the profile of John Holland.​

“As a Club sponsor we have thoroughly enjoyed interacting with Blades fans and supporting local charities and this is something we are excited to do again next season.”

Throughout the season we have launched several social media competitions for Blades fans to win money cannot buy prizes.

Sheffield United’s Head of Commercial Paul Reeves said: “By extending the shirt sponsorship, John Holland has given Sheffield United an opportunity to continue working with a great local business and we are thrilled to announce that this relationship will continue next season.” 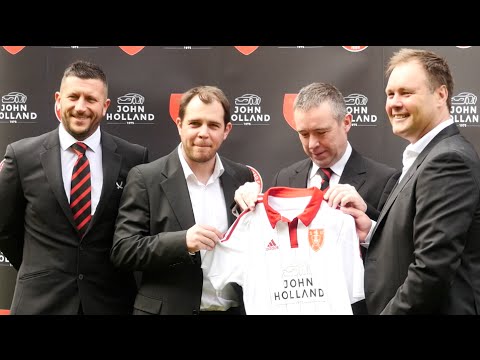 Make An Enquiry
Value My Vehicle
Get in Touch
Back
Compare Saved Vehicles
Top
Close
Your Cookie Settings
Select your cookie settings
Strictly Necessary Strictly Necessary cookies are essential to let you move around the website and use its features, such as accessing secure areas, shopping baskets and online billing. These cookies allow our website to provide services at your request.
Performance Performance cookies collect information about how you use our website e.g. which pages you visit most often, and if you experience any error messages. They also allow us to update our website to improve performance and tailor it to your preferences. These cookies do not collect any information that could identify you - all the information collected is anonymous. They will not be used to target adverts to you on other websites.
Functional Functionality cookies are used to remember the choices you make, e.g. your user name, log in details and language preferences. They also remember any customisations you make to the website to give you enhanced, more personal features.
Targeting Targeting cookies collect information about your browsing habits to deliver adverts which are more relevant to you and your interests. They also measure the effectiveness of advertising campaigns.
Save Settings
Cancel Changes

Your settings will take affect when you refresh the page or move to a new page. Find out more about cookies